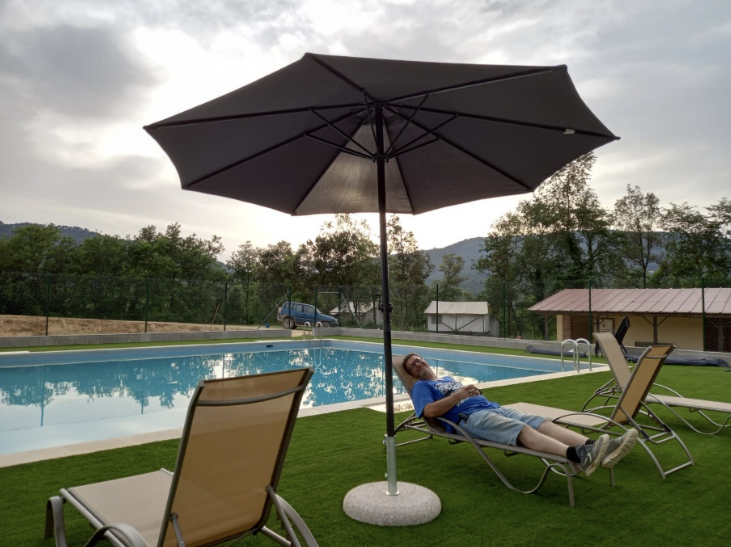 L’Arcada is an evangelistic ministry of GEM since 1991 in northern Spain.
Email: campl’[email protected]

Two days ago, I saw a short video of the camp’s new swimming pool being filled with water. It brought tears to my eyes because the Lord had done so much in such a short period of time through the faithful prayers and giving of so many of you. The board and staff members are ecstatic. There is no lake on the camp’s property, and during its 30-year history the camp has never had a swimming pool. This pool represents the first of three significant victories.

Just a few moments ago we received this photo of Rafa Villalba, the camp’s director of maintenance. Please pray that the Lord will give him the physical strength to handle the tremendous amount of work he has on his plate.

Because the COVID pandemic has abated in Spain, the government is allowing us to increase the number of campers we accept. As a result, 500 campers are signed up and every bed will be occupied except for a few places during our Family camp at the end of the summer. This is the second significant victory.

The third victory is that professional volleyball coaches and one cheerleading coach will be able to come from the U.S. Please pray that Frankie, a North American Indian who has participated in many of our camps in the past, will also be able to come. He adds so much to the Indian motif of the camps for younger campers who are housed in teepees.

But the greatest victory we would love to see happen is that God touch the heart of unsaved campers and accept Christ as their Savior. Many campers will be hearing the gospel for the very first time. A case in point are the 30 members of a local football club that have signed up for the American Football camp. Unlike most campers in North America, most of our campers come from non-Christian homes since evangelicals number only 4/10 of 1% of Spain’s population of 47 million.

Thank you once again for your prayers on behalf of L’Arcada.